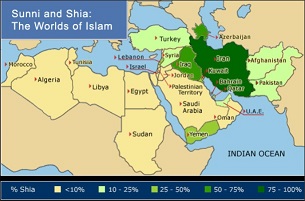 Understanding the religion of Middle Eastern countries helps in understanding many of the current "trouble spots" in the Middle East. Muslims distinguish between two major branches of Islam, Shia Islam and Sunni Islam, The map to the left (click on the map to enlarge it) indicates countries with:

Several current Mideast trouble spots can be identified by whether the religion of the ruling group matches the religion of the majority of the population. When the majority is Sunni and the Shias are in power, or vice versa, the country is often a "trouble spot." That same analysis holds for determining which terrorist groups are on which side. Some details by country and group:

Readers should not think that these sorts of religion-based wars are unique to the Islamic world. In the Christian world, we have the same sort of split between Protestants and Catholics: For example, when Northern Ireland (majority Catholic) was ruled by Great Britain (majority Protestant) a war ensued for decades. And even in America, when John F. Kennedy (the first Catholic president) was elected in 1960, anti-Catholic sentiments resounded among the Protestant American majority. Religious sectarianism among Christians doesn't justify religious sectarianism among Muslims -- but it does make it easier to understand! 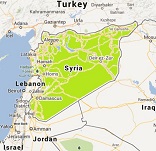 The civil war in Syria has been raging since March 2011, and has killed many tens of thousands of people (approximately 93,000 as of June 2013). It is the latest result of the Arab Spring.

In 2011, the Arab Spring was running strong in several countries but has mostly played out now -- except in Syria. At issue is whether President Assad (a dictator, not an elected president) should stay in power. Two years ago, at issue was whether Assad would implement reforms, but he declined, so the rebels demanded his ouster instead.

The rebels were making progress until Hezbollah joined in, early in 2013 (Hezbollah is the terrorist group that rules Lebanon with Assad's help) -- that turned the tide in favor of Assad.

President Obama had previously established a "red line" that if Assad used chemical weapons, the U.S. would join the fight. Obama declared that the "red line" had been crossed in June 2013. The US, British and French had been aiding the rebels already, but only been sending "humanitarian aid" (food and medicine); as of June 2013 the US is sending "military aid" (small weapons). The Russians back Assad (who has plenty of Russian weapons already, including jets and tanks). So in effect, the U.S. is now fighting a "proxy war" against Russia and Hezbollah in Syria.

Some proponents suggest that the US, UK, and France impose a "no-fly zone" in Syria -- using allied Air Forces to enforce agaisnt the Syrian Air Force. That was done in Libya successfully -- the rebels won with allied air support.

Some opponents point out that the rebels' loose coalition -- called the Free Syrian Army -- has some groups which are affiliated with Al Qaeda. U.S. aid has always "vetted" each group receiving aid, with the purpose of avoiding giving anything to Al Qaeda. But of course materiel gets shared and some U.S. arms may end up in Al Qaeda hands.

The War on Terrorism